Marking not too excessive this weekend, so I spent a long weekend in Devon and Dorset, birding madly all of the seven or so daylight hours until I am exhausted, and driving a little over 800 miles. Things went fairly well; of the seven target birds I got five (American wigeon, desert wheatear, lesser yellowlegs, green-winged teal, and rose-coloured starling). The ones I missed (cattle egret and surf scoter) were probably the least important, as they are the ones of which there are currectly the greatest number elsewhere in the UK at the moment. I also found time to pop in and get two species which are easy to get when you go for them, but only in a VERY few locations in the UK: Bewick's swan and cirl bunting. So in general a good weekend.

Cost 400 pounds and I'm still not even in the top hundred in the league table (http://www.bubo.org/Listing/view-all-lists.html?showlists=1,BOU,1,2017,0)

So. Management sent round an e-mail at the end of term asking staff to remove all food from the communal fridges so they could be switched off to defrost over the break.

Someone was obviously dispatched to go round and do this. Looking into the biology labs, he saw a number of fridges and freezers, so he turned those off as well...

Today went a little better. Since the weather was supposed to be bright and sunny I went for the juvenile pallid harrier in Holderness. Arrived on site about 9, to be told it was sitting on a post half a mile away. Within five minutes it had taken flight and proceeded to quarter the marsh for about ten minutes, giving excellent views.

Given how fast the harrier had appeared, I then headed over to a village near Chatsworth where a juvenile dusky thrush has been hanging around for a couple of weeks, arriving around half-one, after awful traddic in Chesterfield and awful signposting. The bird news services were trying to prevent birders from parking in the village, but although the parking is limited it was coping this afternoon, with no-one parking anti-socially or illegally. Anyway, most of the non-residents' cars seemed to belong to walkers with spiked sitcks and inappropriately-bright clothing. The thrush was some 300 yards from a public road, feeding under a hedge. It was rather prettier than most little brown jobs, or perhaps that is because it was a life tick?

Last time I kept a year list I got two rares and a lifer on the first day; this time it took me twice as long :) On the other hand as I have been to a small town park, some fields with an expanse of reedbed, some more fields and some fields in a village, I have seen hardly any birds this year, which is rather embarrassing. In fact I have seen a total of 34 species, not including great tit.

With 12 rare birds in the country, and a resolution not to seek anything non-rare before half term (to prevent birding taking over my life), I chose a black-throated thrush in Llanelwy in North Wales today. The bird had been showing three or four times a day recently in various places, and I reckoned that Jan 1, with lots of pairs of eyes in the field, would be a good day to look for a wide ranging bird.

I was wrong. The damned thing didn't show all day...except for one occasion on which someone 'saw it in flight'. Hmmm.

The only positive thing resulting from a 240 mile drive and 10 hours of total effort came when I took a lunch break and zipped 5 miles down the road for an easy tick... 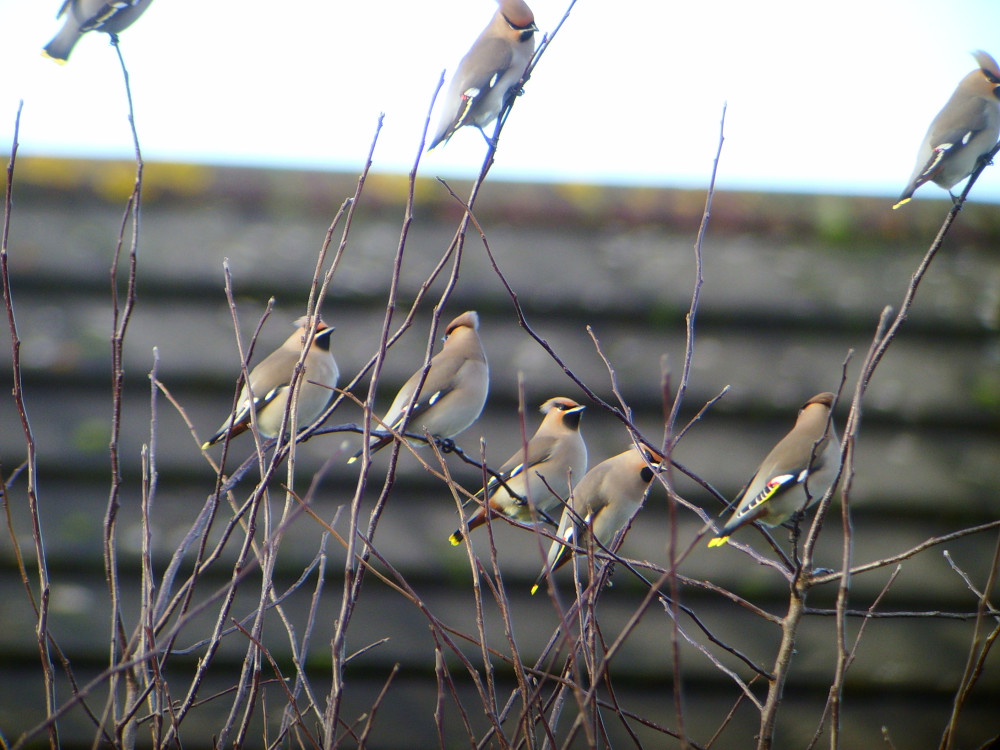 And off I go on the first twitch of the year... So why exactly did you send me four? Now I have a raspberry sitting in a pot while i figure out what in Hell to do with it.

A crag martin which has mistaken a football stadium in Chesterfield for a crag in North Africa has today put me one bird ahead of my previous best. Year lists available on www.bubo.org!

Today I equalled my previous UK Big Year total of 304 (an arctic warbler). Unfortunately for all my efforts, it is not going to be a very good score; I managed to pick an El Nino year, which tends to equal very low Uk Year List scores (though it does mean I am still picking ripe outdoor grown tomatoes in Yorkshire... on the whole I would prefer ticks to tomatoes)

Motorhead is one of the oldest bands still playing which is well known as a 'heavy metal' band. Way back in the year 2000 they recorded a song with the lyrics: 'We are the first and we just still might be the last 'relating to their music. They started in the late seventies, so Ok...

Tonight I watched some footage from the 2015 Wacken Metal Festival. The band Judas Priest played. This band started in Birmingham about the same time as Black Sabbath depending how you count it, though it didn't get signed till many years later. But two of the original members of that band were playing Wacken this year, who were definitely in the band in the 60s: Ken Downing and Ian Hill.


They were the first and they might yet be the last performers of metal. *raises my glass ti Ian Hill and KK*
Collapse